Are You Making the Most of Your Social Media Interaction? 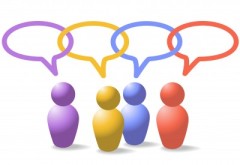 Social media interaction accounts for a majority of brand recommendations. Think about it. If you have a positive conversation about a product or service with a company wouldn’t you be more willing to try it.

The findings of a recent report show nearly 90 percent of all consumers will share positive feedback regarding a brand after social media interaction. And companies like yours can expect a triple ROI when they do.

In one particular case, more than 4,500 surveys were gathered from the social media pages of giants like Heinz, Kettle, and Twinings. During that two-month period, the responses were also mixed with 800 interviews to develop detailed findings. This format was able to show that after exposure to the company’s social media, four out of five people felt more inclined to buy that brand more. In some instances, the 83 percent of the customers were more than happy to sample the product.

The three companies are very aware of just how well social media interaction can drive ROI. These relationships, regardless of how small and apparently insignificant, can drive brand sentiment, increase brand loyalty, and encourage consumer engagement.

Branding sentiments were measured and Heinz came out with 22 percent, Kettle with 17 percent, and Twinings, 19 percent. The European study clearly shows that for every pound spent on social media interaction it equates to three times in profit generation. That’s a great ROI.

The director on the project believes the findings paint a clear picture of how productive it is to connect with your customers. Social media interaction is, therefore, a very essential part of doing business and should be treated as such.

Expand your channels to include brand awareness. The evidence exists that by demonstrating a real-life emotion connection with your brand, you have a better chance at establishing genuine loyalty and relationships. At the end of the day that accounts for bigger ROI.

Social media interaction doesn’t have to be scary. Let the team at Susan J. Campbell Copywriting Solutions develop a plan to connect you with your potential fans.

1 Response to Are You Making the Most of Your Social Media Interaction?